CANDY POWER: CO-FOUNDER, PLACENCIA HUMANE SOCIETY
3 December, 1944–27 October, 2015
Legacy is something that remains after we leave this world—something that speaks of our lives when we are no longer here.
For Candy Power, her legacy is very clear: it was her passion and devotion to all animals that manifests itself in the Placencia Humane Society.
Before Candy arrived in Placencia in the late 80’s, Candy taught school and worked for the Bureau of Indian Affairs in Colorado, U.S.A. She married her high school sweetheart, and they had a beautiful daughter, Kelli. Her grandson, Jonathon, was the light of her life.
As an ardent lover of animals, she immediately connected with Deb Vernon, who was already a pioneer in the care and protection of Placencia animals. These two dynamos joined forces, shared ideas, going door to door tirelessly, raising awareness and funds for pet and stray animal wellbeing.
In this spirit, Placencia Humane Society was born over 17 years ago.
Paralyzed suddenly by no one quite knows what, Candy didn’t give up. She recovered some leg movement through sheer force of will and physical therapy. Weighing barely 85 pounds, she ran a catering business, and later started a car rental partnership. 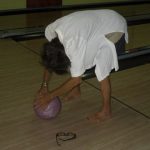 Candy could bowl backwards, pole dance, joke with the best, but when it came to animals, they were her serious commitment.
Candy was our go-to person for cat care, day or night. Candy’s Cattery was the only group in southern Belize (maybe the whole country) that took in stray cats. Did you know that many of Candy’s Cattery were abandoned cats, quite literally tossed into her yard? Candy never turned away a one of them, nor did she terminate them. She loved them all, lost sleep feeding them with eye droppers, and gave them goofy names. 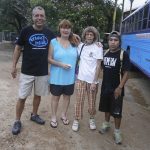 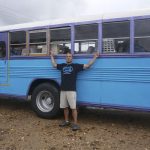 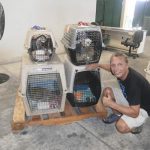 In the last months of her life, Candy required further medical attention in the U.S. But she would not leave her pets behind. A rented Ritchie bus housed “Candy’s Ark,” and transported six dogs, seven cats, Candy, and her two good friends, Wynand and Dana (who also financed this part of the trek) from Placencia to Belize International Airport, for further transport to Colorado.
Her closest friends share with you their fondest memories of Candy:
“Candy was one of a kind gal–she had a soft heart with a tortoise shell cover. She pretended to be tough but she wasn’t as tough as most people thought. I do miss her and the thought I will never see or talk to her again saddens me.”
“Nothing or nobody held Candy down for long – she always came back up fighting, spitting – and most of the time, grinning.”

Quite a legacy, Candy!